[Java][Profiling][JVM] Everybody lies, profilers too

There is an excellent presentation on YouTube called Profilers are lying hobbitses by Nitsan Wakart. I strongly recommend you to watch it. Here is another example of lie from profilers.

The beginning of the output is:

That means that our ArrayList executes method grow() while adding an element. That add is invoked from ArrayListGrow.fill. But how is it possible? That list is created with new ArrayList<>(SIZE) and we are adding exactly SIZE elements. The ArrayList shouldn’t grow in that case. Let’s run it in the debugger. Let’s create a breakpoint at runTest() line to skip the spoil() part first:

Now let’s remove that one and create one in ArrayList.grow(): 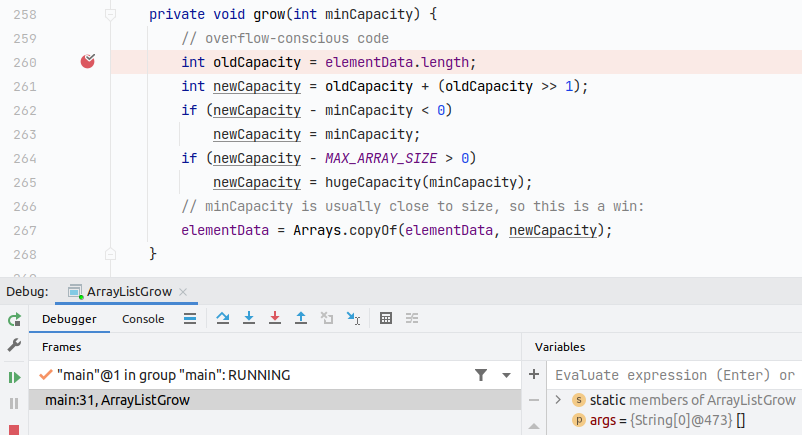 Let’s hit continue, so debugger could stop in the new breakpoint… and it doesn’t want to stop. So the profiler shows us a huge usage of ArrayList.grow(), and the debugger shows us no usage of that method. Who should we trust?

This time the debugger has right, but we cannot blame any profiler for that lie since this is a …

That bug was originally spotted by me, the original discussion over that topic is here. My reconstruction was much more complicated than Andrei’s, that’s why I prefer to show his version. The bug is registered with number JDK-8281677.

This bug hurts all profilers that use AsyncGetCallTrace or PerfMapAgent, so basically every modern profilers (Async-profiler, JProfiler in async mode, Perf + PMA, eBpf profiler + PMA, …).

This bug is not just an ArrayList issue. I encountered multiple parts of my code where profiler lied to me because of that.