[Java][JVM Logs][GC Logs][G1GC] Monday with JVM logs - efficiency of the old generation cleanup - is my CPU wasted by the G1GC?

Here is a part of the documentation form Oracle site:

The Initiating Heap Occupancy Percent (IHOP) is the threshold at which an Initial Mark collection is triggered and it is defined as a percentage of the old generation size.

G1 by default automatically determines an optimal IHOP by observing how long marking takes and how much memory is typically allocated in the old generation during marking cycles. This feature is called Adaptive IHOP. If this feature is active, then the option -XX:InitiatingHeapOccupancyPercent determines the initial value as a percentage of the size of the current old generation as long as there aren’t enough observations to make a good prediction of the Initiating Heap Occupancy threshold. Turn off this behavior of G1 using the option-XX:-G1UseAdaptiveIHOP. In this case, the value of -XX:InitiatingHeapOccupancyPercent always determines this threshold.

Internally, Adaptive IHOP tries to set the Initiating Heap Occupancy so that the first mixed garbage collection of the space-reclamation phase starts when the old generation occupancy is at a current maximum old generation size minus the value of -XX:G1HeapReservePercent as the extra buffer.

After the IHOP is reached the G1GC starts the concurrent mark phase. When it finishes its work, the G1GC runs a set of mixed collections that clears the old generation. It can run from 0 to -XX:G1MixedGCCountTarget=8 mixed collections (8 is the default value).

At the end of the concurrent mark phase the G1GC runs the remark STW phase, which also can clean the old generation. That phase reclaims completely empty regions.

How many mixed collections should be run after a single concurrent mark phase?

This is a hard question. It completely depends on what your old generation contains. There is a value that is potentially bad for every application. It is 0. If in the concurrent cycle there were 0 mixed collections, and the remark phase didn’t clean any empty region, then G1GC didn’t collect anything from the old generation. The concurrent mark is done in separate threads, but it consumes the CPU.

At the beginning of each GC cycle you can find the name of the collection at info level:

As usual, we can put such a value on a chart (all charts are from 1 day period): 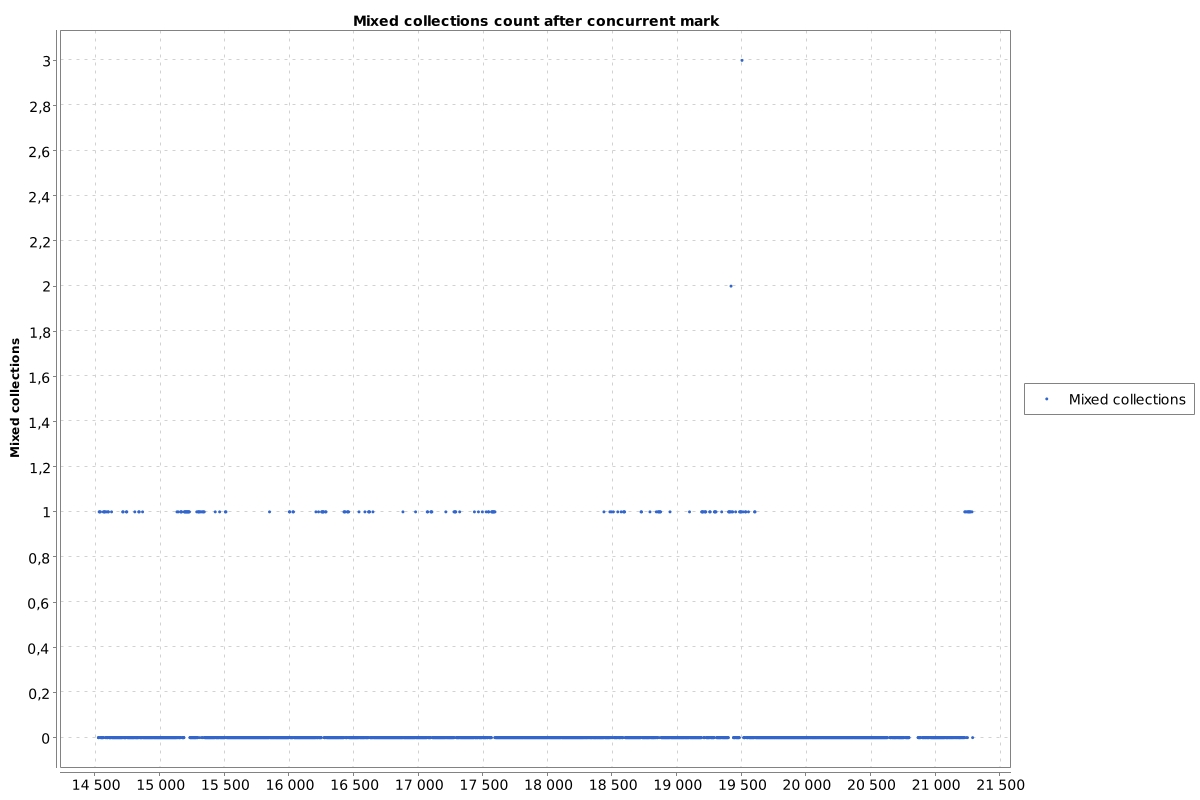 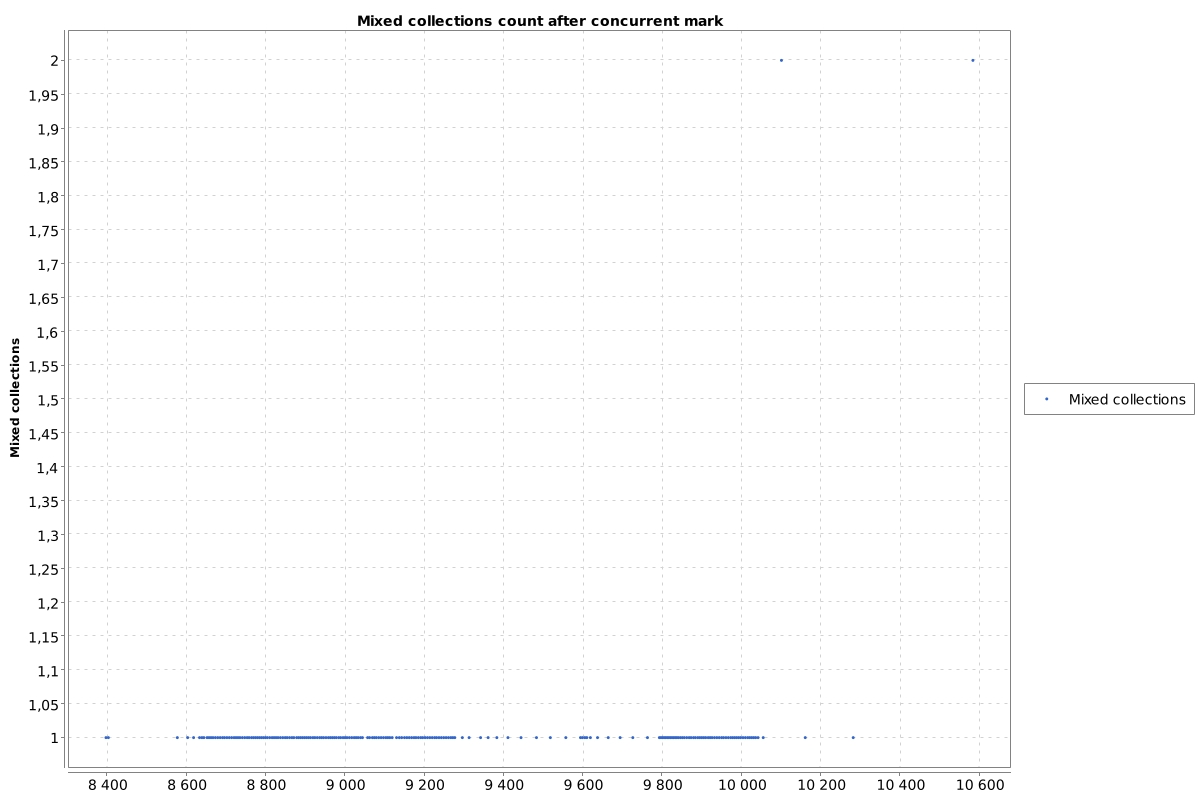 At the end of each GC cycle (including the remark one) you can find such an entry in GC logs at info level:

Value A - B is the reclaimed space by this cycle. 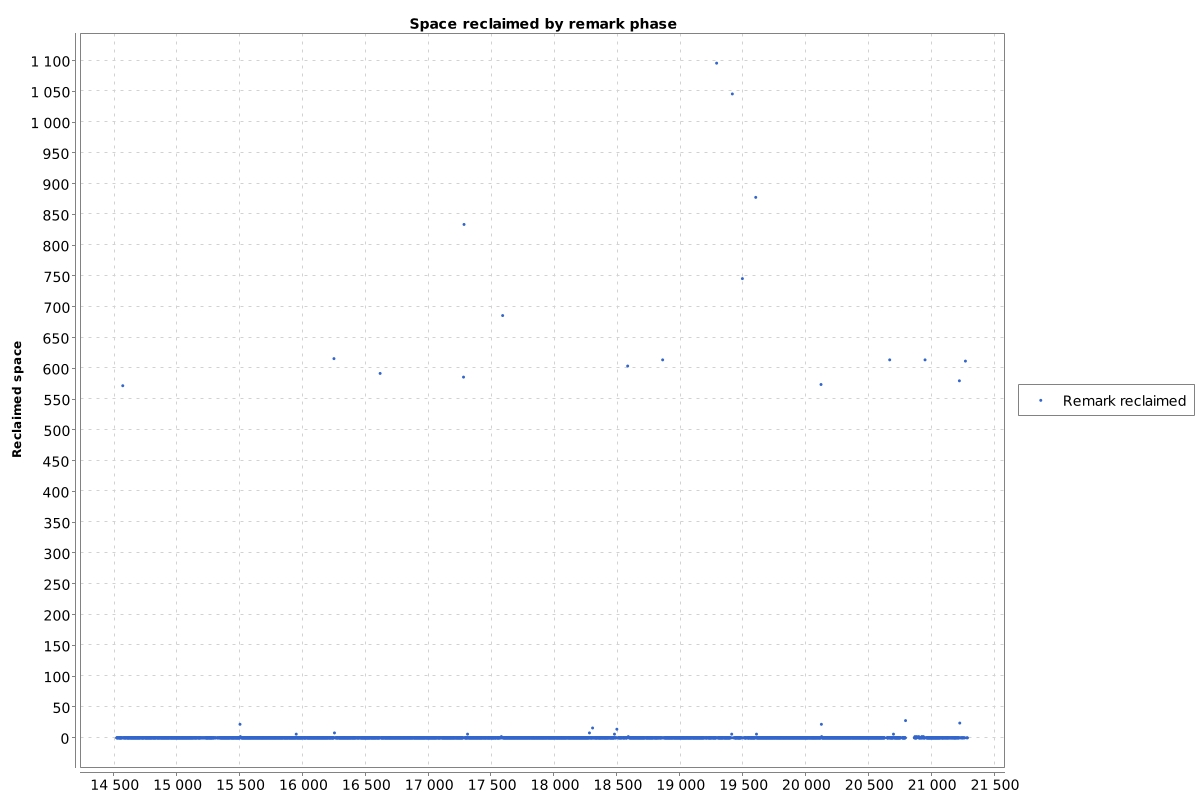 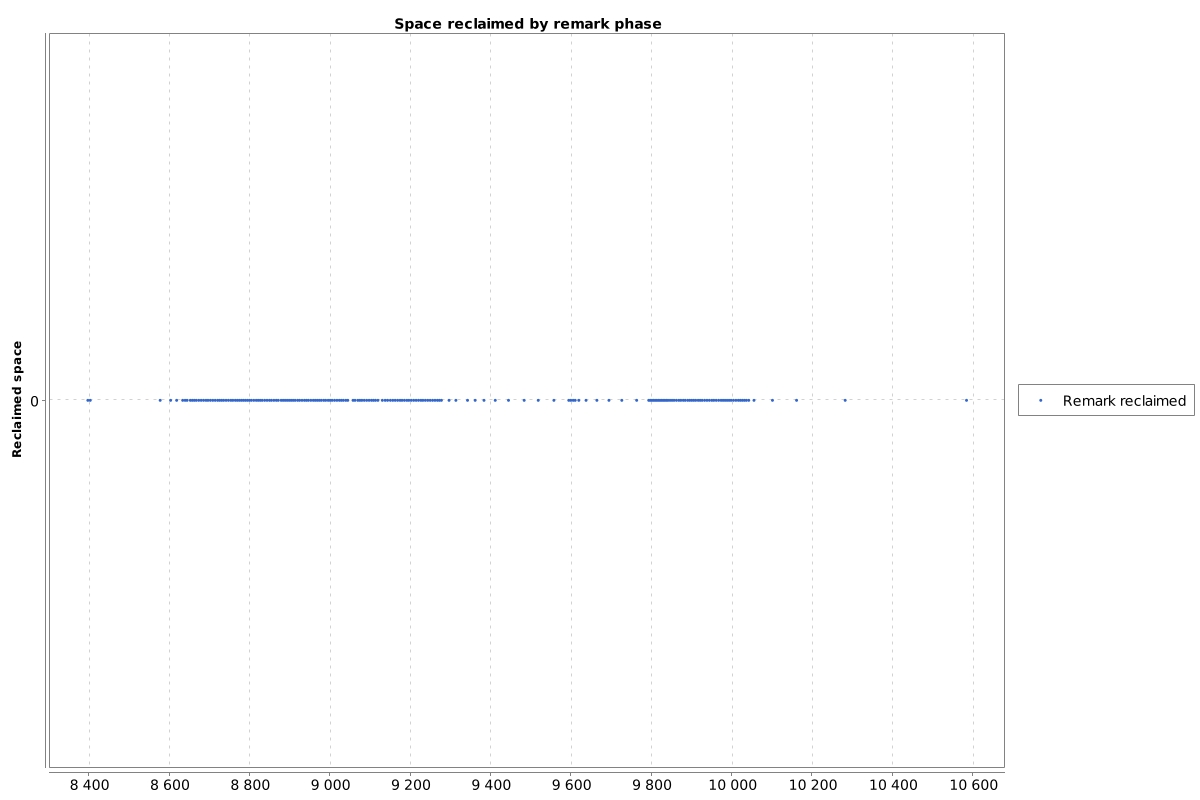 If both values were equal to 0 then the CPU was wasted for a concurrent cycle that didn’t reclaim anything. We can present that at charts: 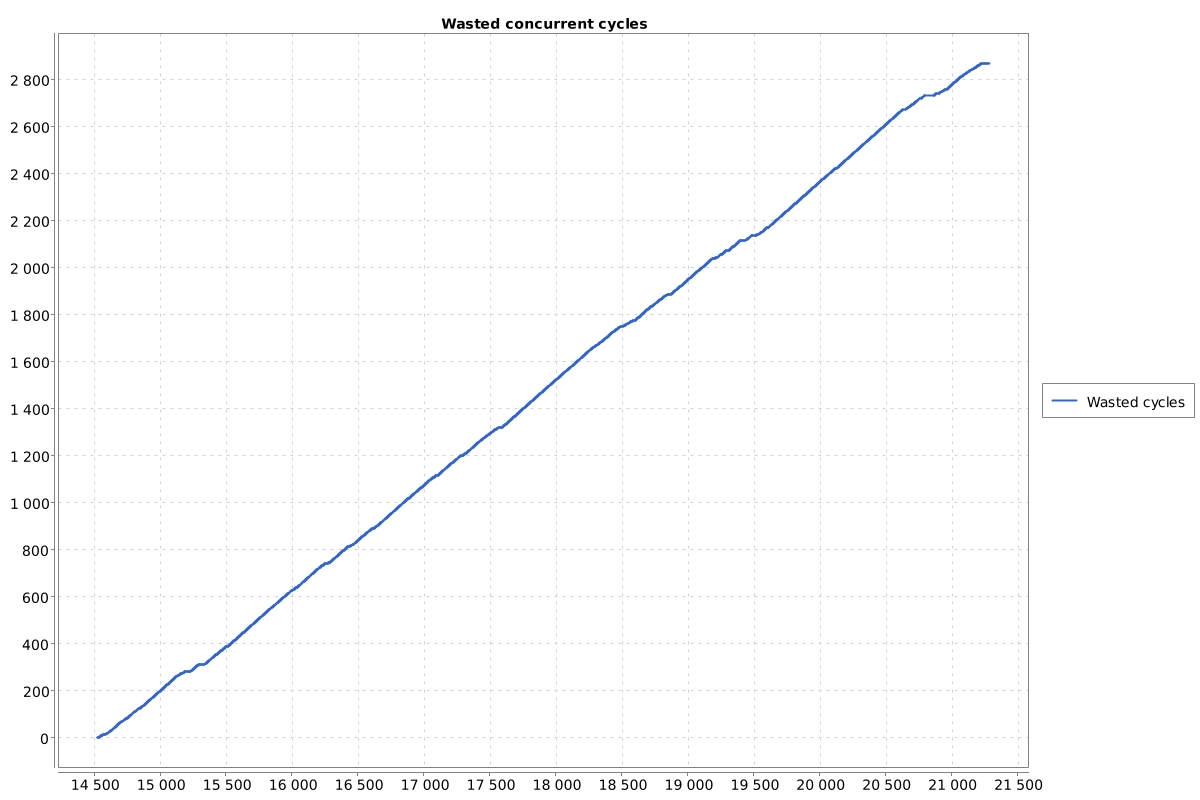 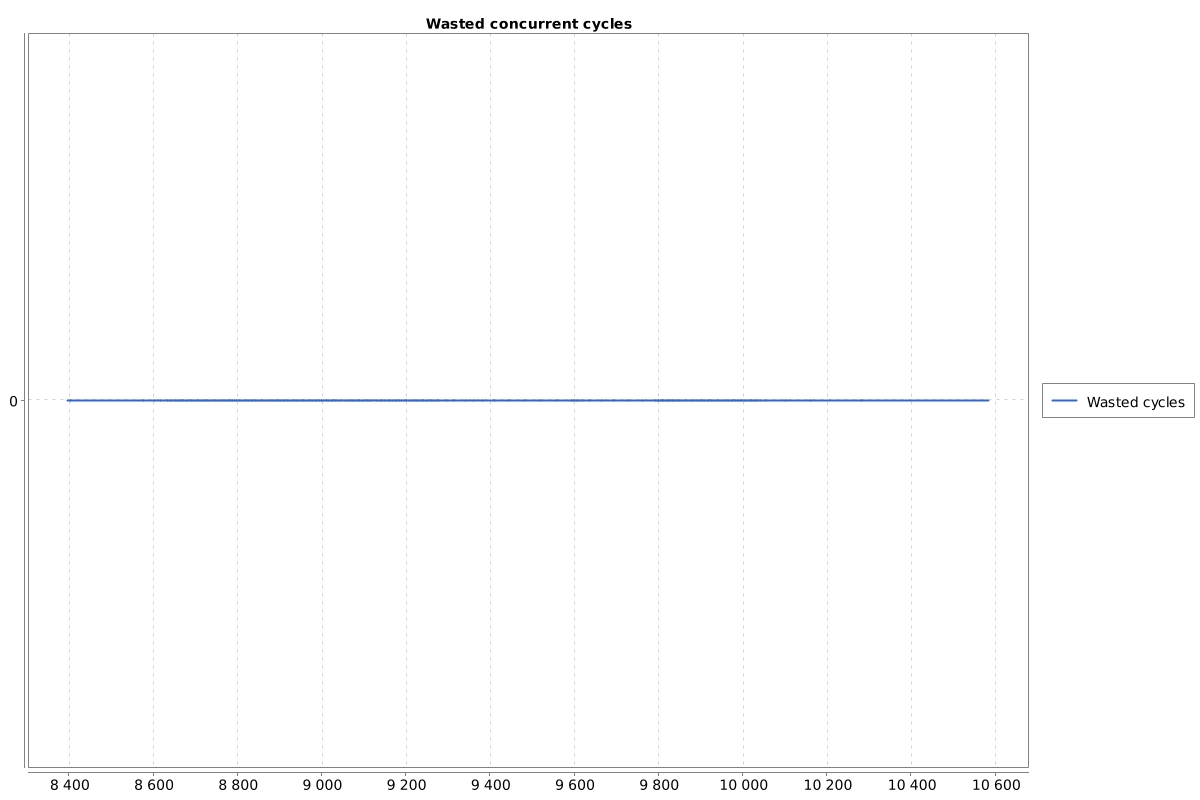 Or we can present that at table:

The number of wasted CPU cores depends on the -XX:ConcGCThreads argument. If you want to know the default value on your machine you can run:

The adaptive calculation of IHOP was introduced in Java 9, in older versions the starting old generation occupancy percent was fixed. The default value was -XX:InitiatingHeapOccupancyPercent=45.

Here is a part of the log of such a situation: