[Java][JVM][Tuning][Profiling][G1] To tune or not to tune? G1GC vs humongous allocation

This article shows some JVM tuning using some JVM flags. You should never use any JVM flags without knowing what consequences they may produce.

What are humongous objects?

Java will tell you what the region size is:

If you want to know size of region on running JVM you can do it through jcmd and many other tools:

Humongous objects are objects that are bigger than half of region size. They are usually large arrays.

Production example of that fail 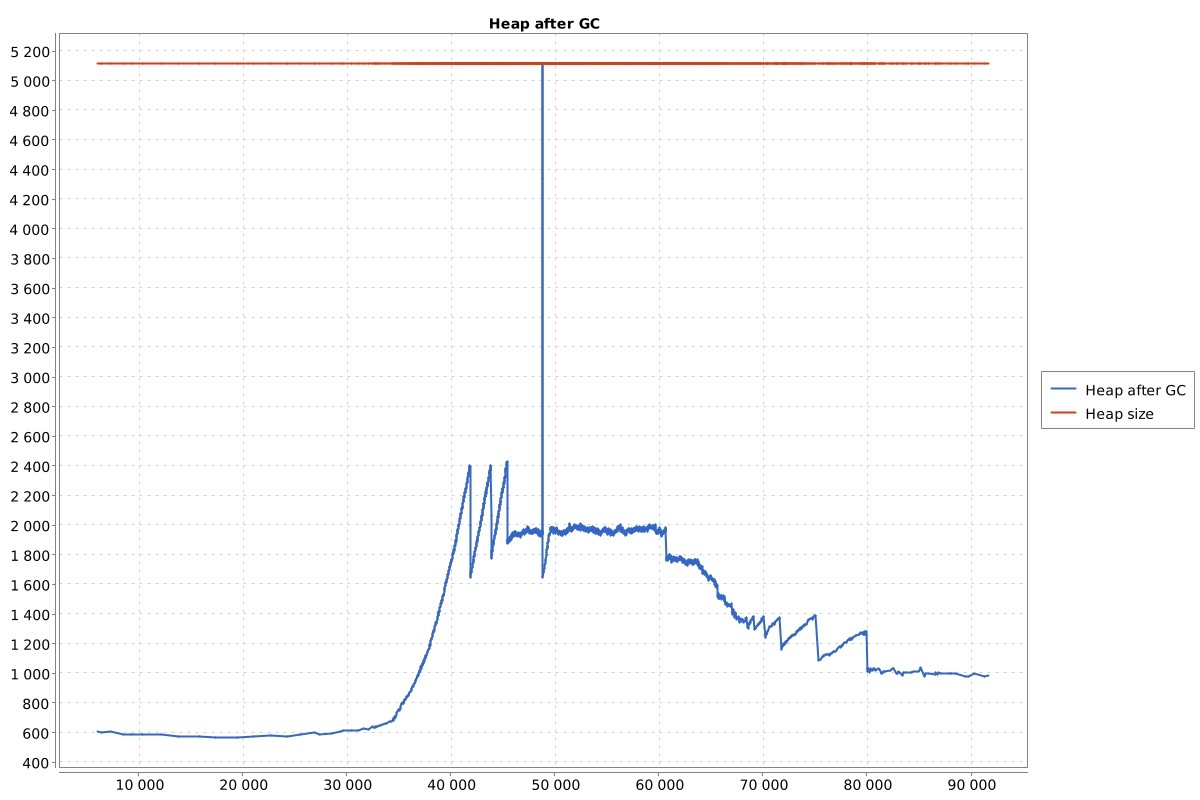 Everything is normal except one spike in the middle. Let’s look at GC stats in the table: 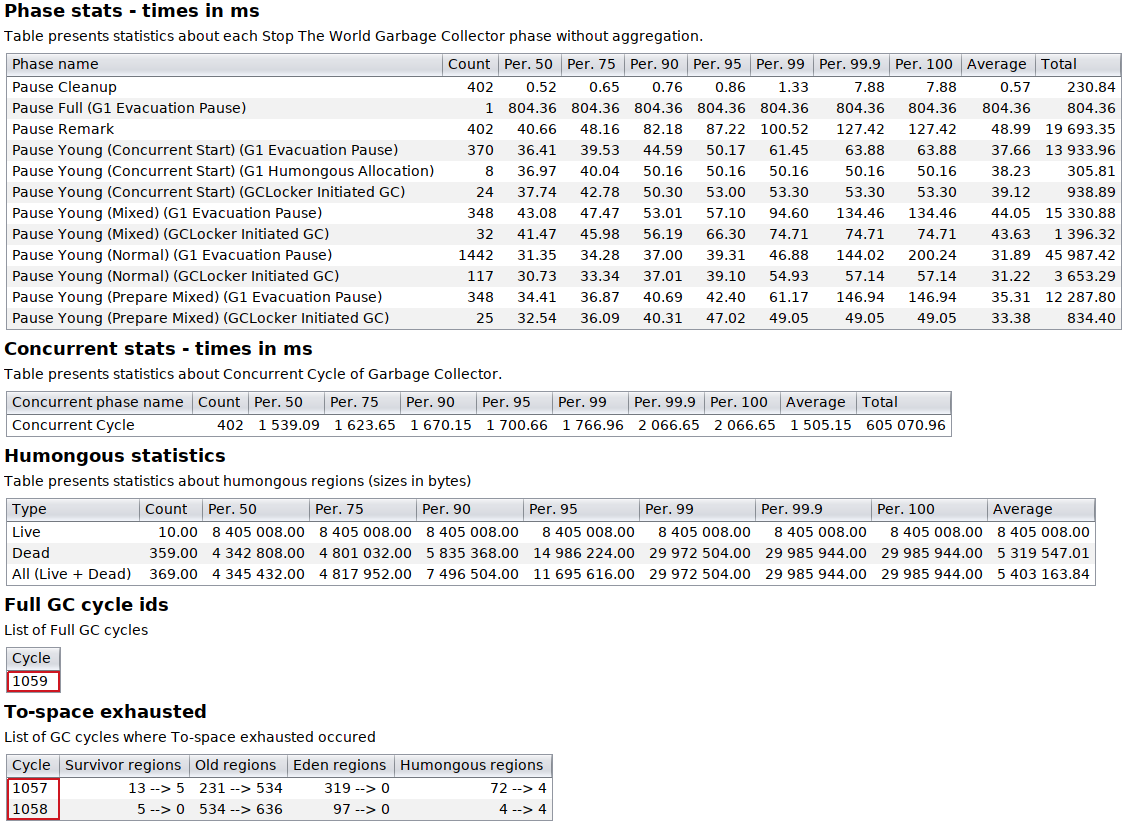 We have one Full GC pause, cycle number 1059. Before that cycle there were two cycles with To-space exhausted situations (no room for GC to copy objects). Let’s look at raw text logs, and see cycles from 1056 to 1058.

A little tutorial how to interpret those lines:

So in the cycle 1056 everything was normal, then in 1057 we had 72 new humongous objects. GC failed the evacuation process (collection marked by To-space exhausted) and moved almost all objects from the young generation to the old one. It can be seen in line with old regions 231->534, so 303 new old regions appeared. Then G1 simply cannot clean the large old generation in “good enough” time and does a fallback to Full GC. If we count all regions in the 1057 cycle, we have 319+13+231+72=635 regions filled (from 640), so G1 has only 5 regions for his job. It is no wonder that G1 failed.

When we look at the region count before the GC chart, we see that there was only one spike of humongous objects during the whole day (logs are from 24h period). 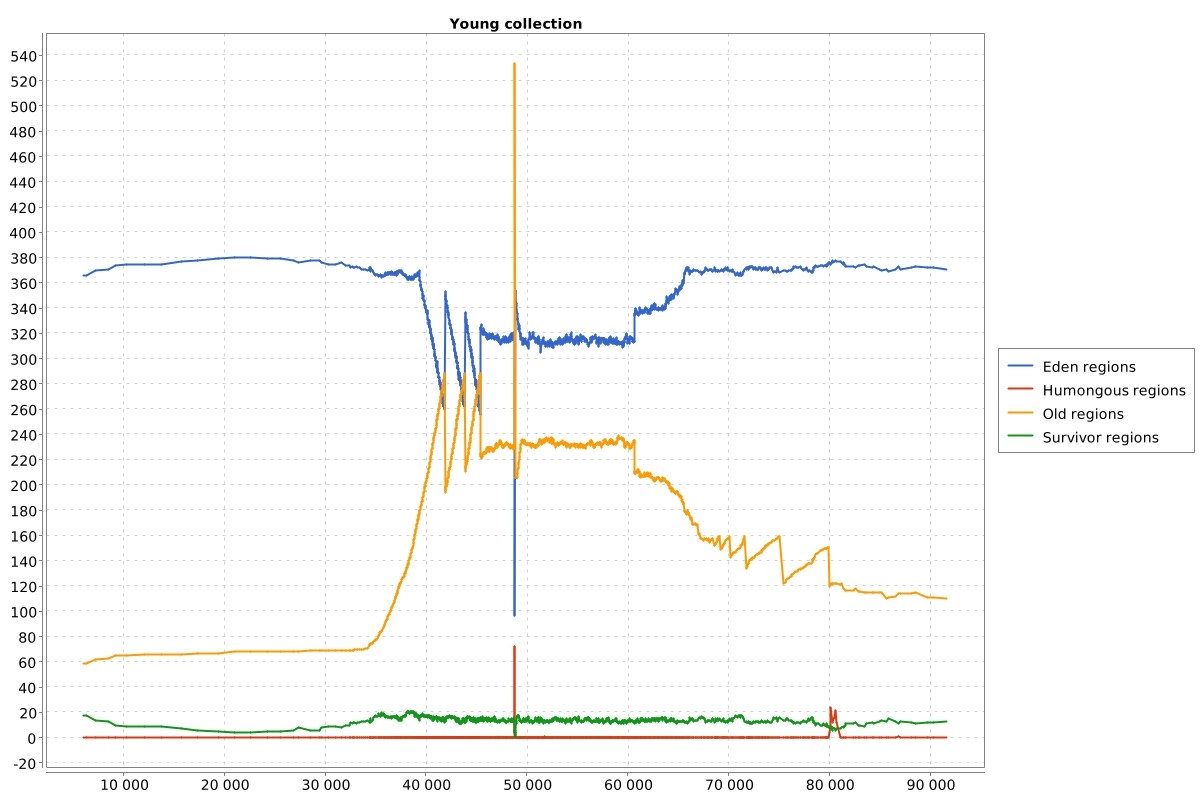 I was told that such a situation occurs once or twice a day on every node of this application.

What can we do to fix it?

If you google, what can you do about it, most of the time you will see suggestions, that you should tune GC by increasing region size. But what’s the impact of this tuning to the rest of your application? Nobody can tell you that. In some situations you can try to do it, but what if a humongous object would have 20MB? You need to increase region size to 64MB to make that humongous object normal young generation objects. Unfortunately you cannot do it, max region size is 32MB (JDK 11u9). Another thing to consider is how long such humongous objects live in your application. If they are not dying very fast then they are going to be copied by the young generation collector, this may be very expensive. They also may occupy most of the young generation, so you may have more frequent GC collections.

The application mentioned above did such tuning twice. First, development team increased region size to 4MB, and after that they increased it to 8MB. The problem still exists.

Is there anything else we can do apart from GC tuning?

When it comes to object on heap we have two points of view:

Since we want to find where humongous objects are created, the second, and the third option are more suitable, but there are situations where heap dump is “good enough”.

There are two kinds of allocation profilers:

I will cover only the first type. Two allocation profilers that I know that can be used on production for such purposes are:

They are using same principle, from Async-profiler readme:

The profiler features TLAB-driven sampling. It relies on HotSpot-specific callbacks to receive two kinds of notifications:

This means not each allocation is counted, but only allocations every N kB, where N is the average size of TLAB. This makes heap sampling very cheap and suitable for production. On the other hand, the collected data may be incomplete, though in practice it will often reflect the top allocation sources.

If you don’t know what TLAB is, I recommend reading this article. Long story short: one TLAB is a small part of eden that is assigned to one thread and only one thread can allocate in it.

Both profilers can dump:

After dumping data we have to post-process output file and find humongous objects.

In my opinion, Async-profiler is the best profiler in the world, so I will use it in the following example.

I wrote an example application that does some humongous allocations, let’s try to find out where this allocation is done. I run (from async-profiler directory) profiler.sh command with:

Now I have to post-process output file and find interesting stacktraces. First, let’s look at GC logs to find sizes :

First let’s look at content of our output file:

Humongous objects are usually allocated outside TLAB, because they are very big. Let’s look at those allocations:

By default, stack trace is cut to 5 top frames, you can change it using –stack-depth option.

From the output I put above, we can read that we have 3 objects we were looking for, we can read from it, that our humongous allocation is done with thread “badguy”, and is done in lambda in Application class.

Humongous allocation is done in g1CollectedHeap.cpp in:

To trace its calls we can use:

Tracing such calls with async-profiler is really easy. We have to run it with options:

And we can see humongous allocations:

If you need thread name you can add -t switch while running async-profiler.

Everything I wrote so far is easy. Now we have to modify our application. Of course, I cannot fix every humongous allocation with one article. All I can do is to write production examples and what has been done with them.

Fix: Changing cache provider for those maps where humongous allocation appeared. There were massive byte[] transported through the network, it was not effective at all.

Humongous allocation: Application had HTML form, that allowed to send files with size up to 40MB to DMS (document management system). Content of that file at Java code level was simply byte[], of course such an array was a humongous object.

Fix: Backend for that upload form was moved to a separate application.

Humongous allocation: Hibernate engine was creating a very large Object[]. From the heap dump I could find what kind of objects they were, and what content they had. From the profiler I knew which thread allocated them, and from application log I knew what business operation invoked it. I found following entity in codebase:

Such mapping created multiple joins on SQL level and created duplicated results that had to be processed by Hibernate.

Fix: In this entity it was possible to add FetchType.SELECT, so that’s what was done. Keep in mind that can cause data integrity problems in some cases, so again, this change helped this application, but it can hurt yours.

Humongous allocation: One application fetched “product catalog” from another application through WebService. That created a huge byte[] (around 100MB) to fetch data from the network.

Fix: Both applications were changed to give possibility to fetch “product catalog” in chunks.

To tune or not to tune?

As a rule of thumb I suggest changing application first if this can solve your GC problems.